The removal of central excise duty and replacement with CENVAT and sales tax system was a significant milestone achieved in the indirect tax reforms. It achieved one goal in particular; it simplified the rate structure and broadened the tax base by addressing the cascading effects by discharging the input tax as well as one paid on input. However, that system had its flaws and as it happens with any system, it went on to become unfriendly, cumbersome, and complicated. Introduction of GST addressed several of these issues.

GST brought in a broad-based comprehensive tax system that passed on the tax to the customer and allowed the intermediaries to claim the input credit for the tax paid at each point of sale. GST has several benefits such as increment in the prices of agriculture produce, reduction in the cost of production, and reduction in tax rates. 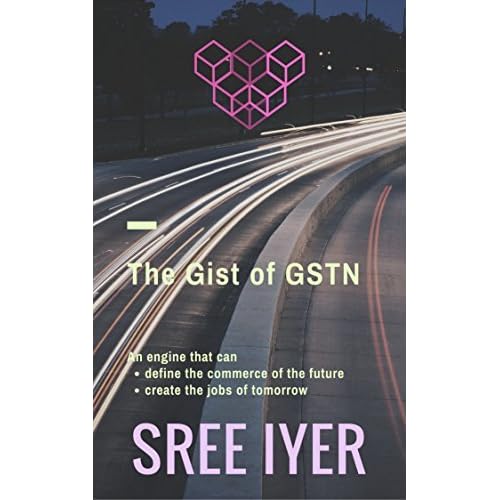 The book, in short, explains the technology behind the implementation of the GST, and how the GST framework can be leveraged to improvise our goods supply chains and logistics as well as manufacturing sector by processing the data generated by this behemoth system.

The book is divided into eight chapters starting with the basics of GST and its limitations, a possible application of distribute ledger technology (blockchain) to GST, and the kind of jobs that could be created using the data collected by the system (my favourite chapter). I’ll discuss this chapter below.

In the chapter Jobs of Tomorrow, Sree proposes how the data generated by the GSTN could be used for the benefit of the people with the help of API. He conceptualises a few API based web services such as

The book is instead concise (36 pages), but the ideas presented here are phenomenal. I wish the author had expanded the Jobs of Tomorrow section a little more going into the depth in each of the subsections. I highly recommend this book to software engineers who could help materialise the concepts discussed in the book.

About the author: Sree Iyer is an inventor and thinker. He has authored several books including the Amazon Bestseller NDTV Frauds. He is also the founder of PGurus, one of the most credible news sites on India, its Business, Politics, and Culture.

With the arrival of multiple streaming companies, content piracy is on the rise again, also with a renewed vigour. What really fuelled this? Here is my take.

The book is a collection of essays written by Sanjeev Sanyal, an economist and urban theorist, who is also currently serving as the Principal Economic Advisor to the PMO. The essays were originally published on various news platforms and were later compiled into book.

NDTV Frauds 2.0 is the second version of the book NDTV Frauds that was released in March 2017. The book talks about detailing the cozy relationships that exist between Babus (Civil Servants), Businessmen, and Bent politicians (3B) in India.

A popular non-fiction book, by Malcolm Gladwell, author of Blink and The Tipping Point. The book is about how we deal with strangers and why we do so.

A short note on fixing upper back and shoulder blade strain.

My opinion about an expert opinion on whether meditation apps really work as they claim.

Cumbu Napier Hybrid or the CO variety of grasses are used as a cattle fodder and can be grown throughout the year.