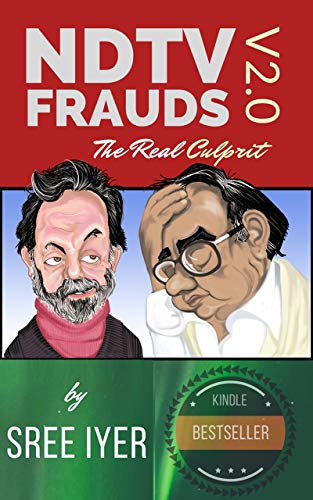 NDTV Frauds 2.0 is the revamped and revised edition of the book NDTV Frauds, written by the Founder of the channel PGurus Mr Sree Iyer. I came across this book while listening to one of the episodes on PGurus about the arrest of P Chidambaram and the way forward.

To begin with, the book is loaded and stuffed with information that at the beginning seems a bit too much. Although Mr Iyer has attempted to simplify the content, the writing is a little challenging to read for a layperson having less or no knowledge about a few key terminologies. Nevertheless, anyone reading the book will get the idea about the magnitude and scale of frauds committed by the media giant. I believe it would be too much to expect the standards of trained authors from someone not trained formally in the art. Even then, the author has ensured that the book is reasonably understandable for the educated public.

The contents of the book are absolutely bulletproof and well researched. Where required, adequate sources of information are mentioned, and exhibits are displayed. The book is an eye-opener even for those who wish to pretend they are asleep and ignorant towards the slanted journalism in the country. After finishing the book, I genuinely felt that we as a country are missing this sort of investigative journalism. The only ones we get to see these days are a bunch of fake investigative pieces by jackals like Mr Rajdeep Sardessai.

In the author remarks section of the book, Mr Sree Iyer writes, “NDTV is not an isolated case of the nexus that exists between the 3Bs. This sordid saga of “skullduggery, treachery and venality ” which weaves in and out of the “boardrooms to bedrooms ” will make your blood boil.” The book begins by counting and listing out the allegations and charges slapped on NDTV by Mr S. K. Srivastava (IRS). The first three chapters look briefly into the crimes, methods, and timeline of the frauds committed by NDTV. At Chapter 4, Sree begins discussing the origins and inception of NDTV and the power it enjoyed, partly due to the Who is Who factor. In Chapter 5, we get to see the nature of journalism NDTV is used to including the Kargil War, Godhra Riots, and the reporting of 26/11. Further on, the author sheds light on the Whistleblower IRS officer Mr S. K. Srivastava, the harassment, and hounding he had to face for exposing the façade created by the 3 Bs.

The real cream of the cream begins with Chapter 17. With the formal entry of Mr P Chidambaram, the ‘dubious’ and ‘duplicitous’, we dive into how lawmakers and bureaucrats were hands in glove with NDTV fraudsters. The magnitude of frauds committed by this nexus becomes even more apparent after reading the exhibit F.No. DGIT(V)/NZ/ COM/113/06, 1-12/N, a letter written by Late Professor and Rajya Sabha MP Ram Jethmalani to Mr PC. Sree aptly uses the phrase “foxes guarding the chickens” to explain how PC misused his Union Hose and Finance portfolio to his benefit and the benefit of NDTV. The concluding chapter talks about the actions taken by SEBI and other watchdogs after the fraud was bought into the open by the likes of Dr Subramanyam Swami, Shri S Gurumurthy, and others.

The book is a must-read for anyone with a general interest or someone trying to understand one of the prominent and organised frauds in India.

With the arrival of multiple streaming companies, content piracy is on the rise again, also with a renewed vigour. What really fuelled this? Here is my take.

The book is a collection of essays written by Sanjeev Sanyal, an economist and urban theorist, who is also currently serving as the Principal Economic Advisor to the PMO. The essays were originally published on various news platforms and were later compiled into book.

NDTV Frauds 2.0 is the second version of the book NDTV Frauds that was released in March 2017. The book talks about detailing the cozy relationships that exist between Babus (Civil Servants), Businessmen, and Bent politicians (3B) in India.

A popular non-fiction book, by Malcolm Gladwell, author of Blink and The Tipping Point. The book is about how we deal with strangers and why we do so.

A short note on fixing upper back and shoulder blade strain.

My opinion about an expert opinion on whether meditation apps really work as they claim.

Cumbu Napier Hybrid or the CO variety of grasses are used as a cattle fodder and can be grown throughout the year.